Mashua, along with Yacon and Oca are all edible tubers, once grown by the Inca's.  We planted all three at Windmill this year, but only the Mashua survived.  We fear that the other two might have been weeded out by over zealous gardeners.  The Yacon has a plant that looks a similar to a Dahlia and the tubers are long and brown.  The Oca plant has a lot of trefoil leaves that spread across the ground and smaller white and red tubers.   The Mashua grows upwards and has leaves, a bit like a Nasturtium, but smaller and more "frilly".  The flowers are small and yellowy orange, and the tubers are mainly white and quite small.  The taste is like a strong radish.  They can be eaten raw, but I prefer them in a stir fry as the taste mellows. 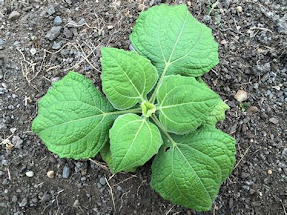 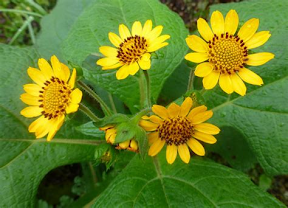 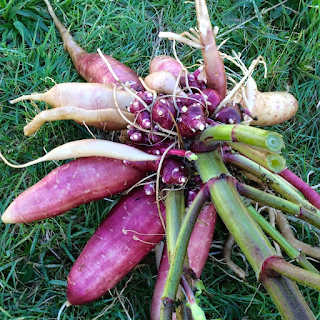 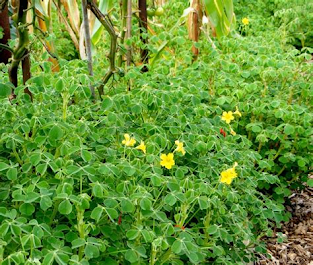 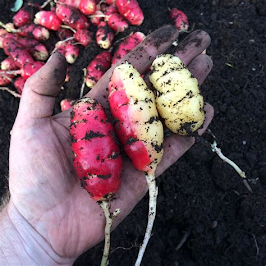 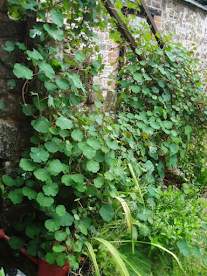 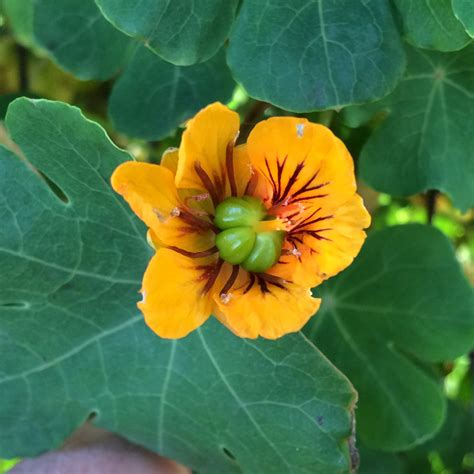 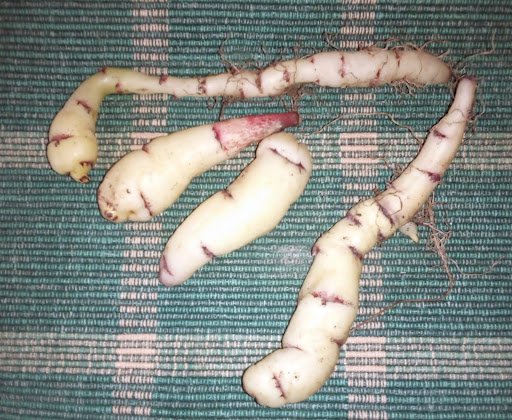 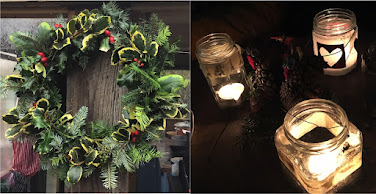 To book, please go to our Facebook page, or email wcgnottingham@gmail.com 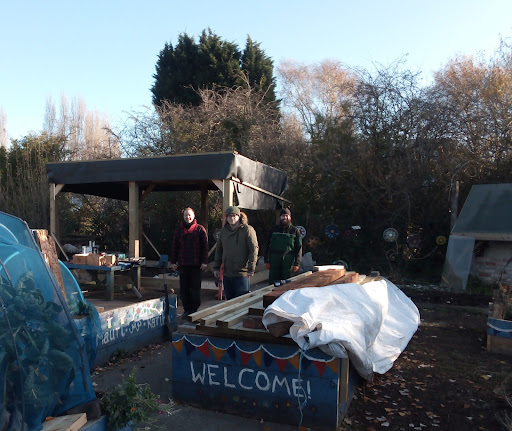 James and his band of willing volunteers have been working hard on our new meeting shed.  It's a wooden structure with a raised floor and veranda at the front.  You can see the roofing fabric, which is recycled rubber, similar to a pond liner.  There will be two opening skylights in the roof and windows at either end.  We are also hoping to get doors with windows for the front, which will be opened up in hot weather.  The rest of the outside will be clad with cedar paneling.  We are still looking for funding for cladding on the inside of the walls.  We are hoping to insulate it really well to reduce the need for heating, however we will probably need a wood burning stove as well.
Once the building is complete, it will be used for visiting school groups and regular gardeners when the weather is inclement.  We are also discussing having a workshop once a month.
Rosie Jarrett 25.11.2021

It's the most wonderful time of the year - for Pumpkin Lovers!

Please join us for fun activities, good food and a chance to use our specialised carving tools to create your own carved masterpiece. There are prizes for the best ones, and for the largest and the strangest pumpkins and squashes that turn up. There will also be games and crafts and lovely pumpkin food to taste and apple pressing as well! We'll have our Spooky woods set up to look around if you dare, with a cosy story telling hut with one of the Nottingham Story Tellers on hand to entertain you.

We will be mostly outside, with canopies to shelter under if it's wet, so we'll hopefully be quite Covid safe, but if you aim to carve in the polytunnel, we hope adults will consider wearing a mask. 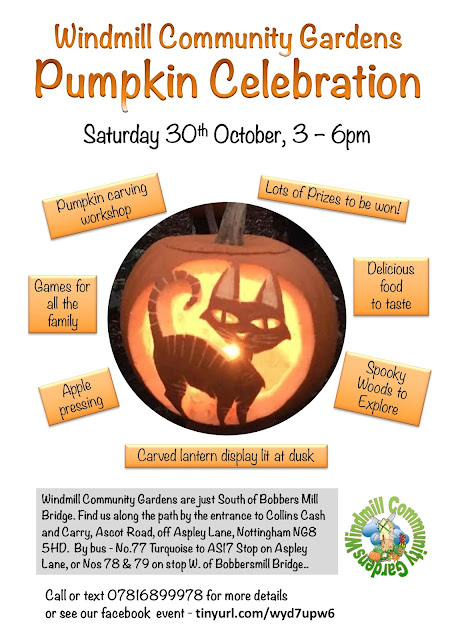 Some people have been telling us they would like to be able to drop in to Windmill a bit later, so we're staying open until 6pm for the next 3 Thursdays - 26th August, 2nd September and 9th September.

If you fancy paying us a visit, Carly will be on hand to help you with a few fun activities and making a snack. Hope some of you can visit! 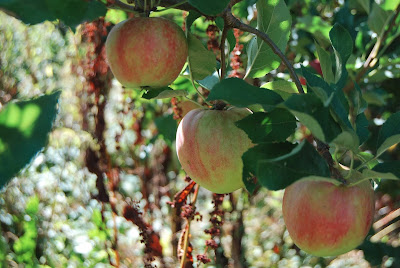 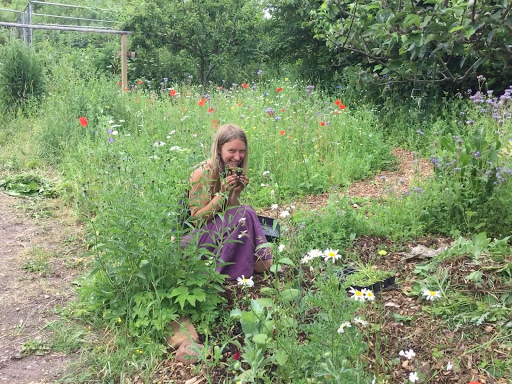 Tammy enjoying the meadow
We have two small wildflower meadows at Windmill Community Gardens, one annual and one perennial.  The annual meadow is dug over every year, after the flowers have died down.  Then new seed is sown in the spring.  Tammy, who is our main meadow volunteer, has changed the seed that we use to dry meadow mix, as she felt that the flowers weren't thriving.  The gardens are on rubble, maybe from the  the old Radford Colliery which was nearby, and the soil is a mix of all sorts, which seems to make it very dry in this area, though it's too wet in our new plot! 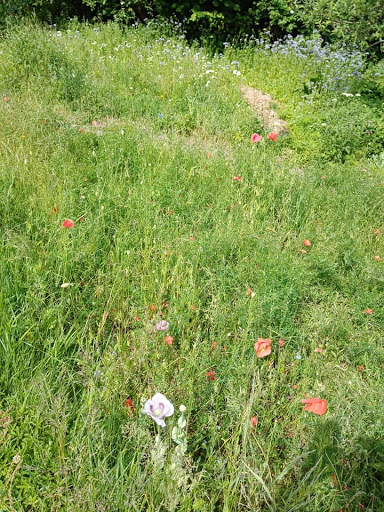 The Annual Meadow
There are smaller plants in this area, which would be found in a traditional cornfield: Cornflower, Common Poppy, Corn Chamomile, Corn Cockle, Corn Marigold and Vetch.  These are not only attractive in the summer months, but bring pollinators, like Bees, Hover Flies and Butterflies to the garden. 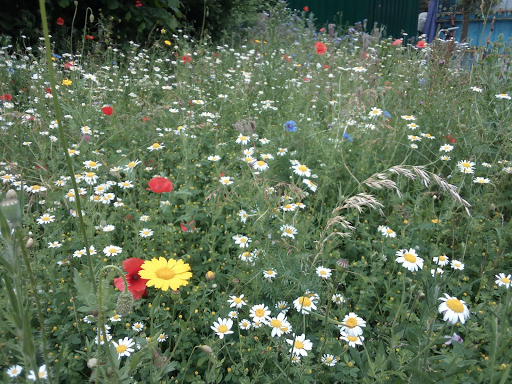 The other side of the path we have our perennial meadow.  Volunteers have been working on this area for months to get it into this wonderful state.  Part of the area was being taken over by Ground Elder which had to be removed.  This was replaced with a variety of plants, many of which which Tammy has grown herself.  Also a different seed mix. The most successful this year seem to be the Phacelia, which are actually native to the Americas. Tammy is using this species to determine the drainage of the meadow. These have been attracting a lot of bees: 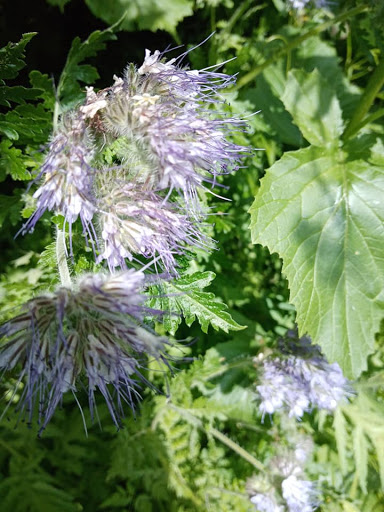 Because it is a perennial meadow it has been possible to grow plants that flower through the spring into the summer.  Starting with Cowslips, Bluebells and of course the favourite early pollinator, the humble Dandelion.  Some plants like the Dandelion will self seed, while others need to be planted and encouraged by clearing things like Ground Elder, which smother them.  Some of the plants that can be found in the perennial meadow are: Ladies Bedstraw, Campions, Ragged Robin, Poppies, Yarrow, Knapweed, Meadow Cranesbill, Salad Burnett, Agrimony, Vetch, Poppies, Ox Eye Daisy, Corn Marigold, Cornflower and Corn Chamomile.  We also planted Yellow Rattle, which is supposed to suppress the grass growth and so increase the amount of flowers.  Unfortunately this hasn't shown it's face yet.  Importantly, we have planted Nottingham Catch Fly, a species of Silene, which Tammy is planting as part of a local conservation project.  Apparently they used to grow on Nottingham Castle walls before the restoration work took place.  Catch Fly have a strong perfume and attract night insects, so are really important for encouraging bats.  Each flower only stays open for three nights to prevent self fertilisation.  Ragged Robin is also a species which is becoming rare.  Notts wildlife are encouraging people like us to grow them.  We are still adding new plants to the meadow and are currently sewing Viper's Bugloss seeds.  I know them from the chalk downlands where I grew up, but apparently they also like disturbed ground, so should do well at Windmill.  Also, unusually for the area, our soil is alkaline. 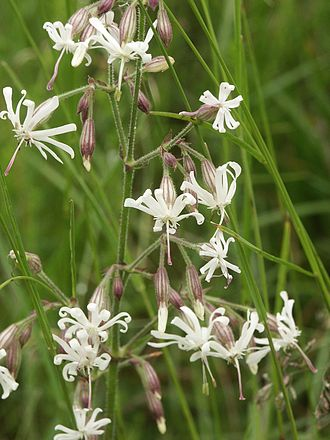 Nottingham Catch Fly (Selene nutans)
We are also planting wildflowers in other areas of the gardens, particularly the wooded area, over the bridge.  Here there is a large central bed and other smaller beds.  We are introducing woodland species like Bluebells and Foxgloves to increase the bio-diversity of the site.  Some of the trees here are native, and others introduced.  We are lucky to have plenty of Dog Rose and Elderflower bushes in the hedgerows, which not only look and smell good, they also attract pollinators and provide us with nourishing drinks. 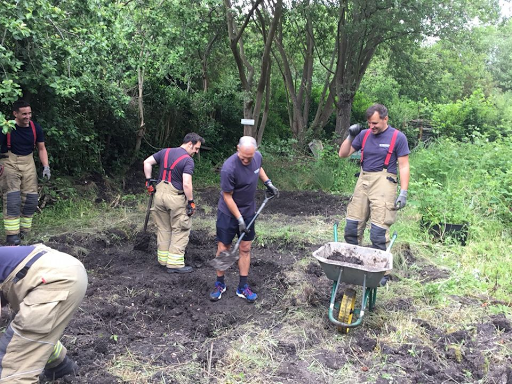 As you may be aware, we now rent the next allotment, which is extremely wet, in contrast to the first plot.  Notts Fire Brigade have kindly dug us a wildlife pond and an area for a bog garden.  There are already three large Poplar trees next to the bog area.  We will begin working on the pond and bog garden soon and the surrounding ground, which is wet and partially shaded.  The plan is that the pond will add some extra drainage.  We will be combining food and flowering plants.  Also making sure that we add species that are important for bio-diversity.  This will be a great opportunity for us to include some wetland plants, such as reeds and irises, as well as less common species.  Of course we are hoping to attract frogs and newts, if the ducks let them survive.  It should also attract insects, so provide a good environment for bats and other animals. 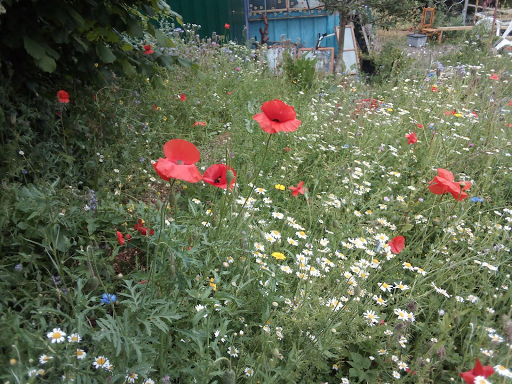 Art in the Garden - a Weekend of Fun 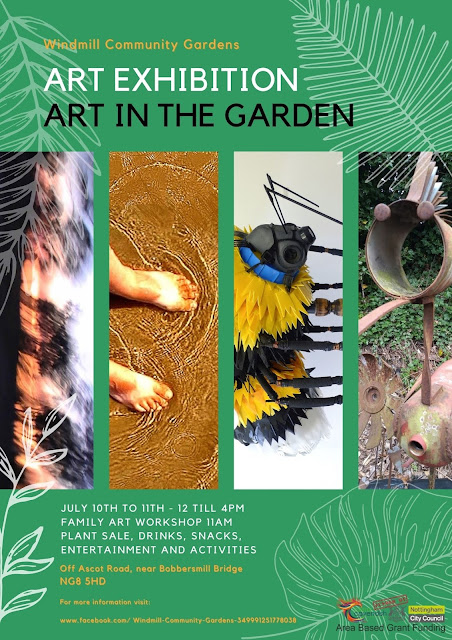 Come and join us for a chance to enjoy our hidden gem of a community garden made even better with contributions from local artists to discover around every corner. There will be a workshop at 11am for families on both days, as well as refreshments and some activities to watch or take part in during the main opening.

Entry is free thanks to sponsorship from Castle Cavendish and booking isn't necessary, though we're opening on 2 days so we can limit numbers on site to fit Covid regulations.

We look forward to seeing you at the event!