Today was the culmination of all our hard work over the last few weeks, when we finally began the creation of our clay oven.

We started bright and early at 8.30am, with the help of Rupert Dick from Real Clay Ovens. Rupert learned his craft at a course organised by Hugh Fearnley-Whittingstall's River Cottage group, and has been creating clay ovens for 8 years. He is a great enthusiast for both the craft of making them and of cooking in them, making our mouths water with stories of the wonderful dishes and bread that he's made in clay ovens over the years. We were joined by 7 enthusiastic individuals who were keen to learn the craft.

The first step was to put sand and bricks into the plinth. This is to create a level surface that will retain heat in the cooking area. We used bricks that Tracey got through Freecycle, which were recycled from a house being renovated in East Leake. Tracey's son Ash had already knocked off the remaining mortar, so all they needed was a quick clean up. 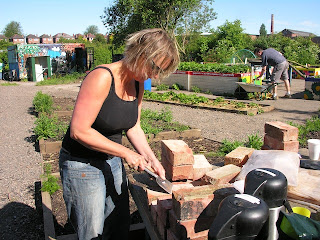 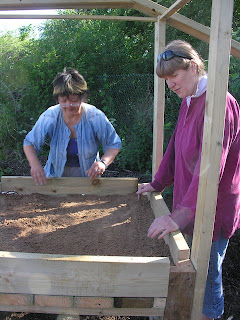 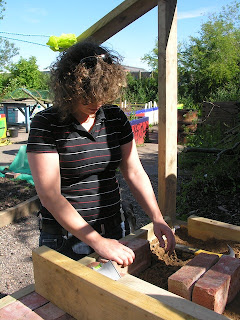 Gemma places the bricks in the plinth 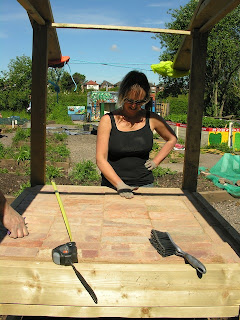 Kathy admires the leveled surface of the plinth
Then we had to mix the clay and sand for the oven. We did this with our feet, which was a lot of fun. Some of the group even chose to do it bare-foot, and discovered that it's a great way to get lovely, smooth feet! We were lucky to have a beautiful sunny morning which made the job a pleasure. 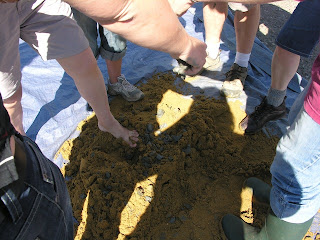 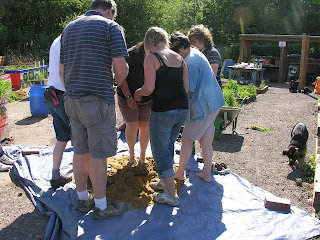 The next step in the process was to create the sand form for the oven, which would allow us to mould the clay mix into the oven shape. The aim is to create something high enough to allow a variety of dishes to be cooked, and in the right shape to ensure the oven will have the right shape to keep a fire alight. We then put a layer of the clay mix over the sand form to make the first layer of the oven. 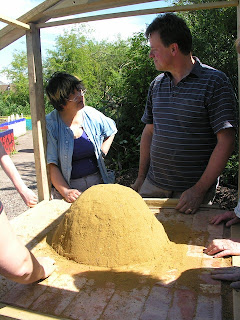 Rupert and Mary discuss the reasons for the shape of the oven. 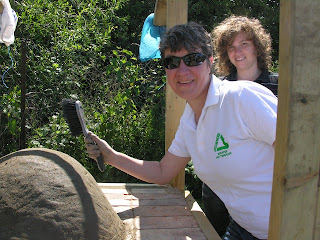 Jo with the finished first layer of the oven.
The oven now needed to dry out for a few hours, so we took the opportunity to be creative. Some of the group added to the decoration on our raised beds, whilst others decorated some willow poles which we will use to create some colour around the allotment. 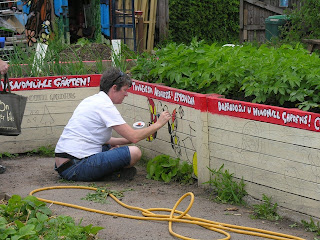 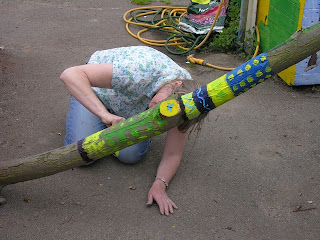 After the oven shape had had time to firm up, we cut the door out and scooped out the sand. This allowed us to set the first fire in the oven so that the heat could help the oven to dry out further. 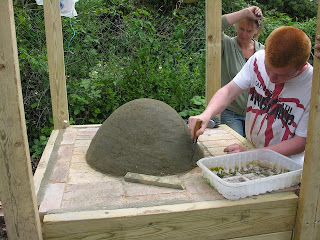 Ellis cuts out the door 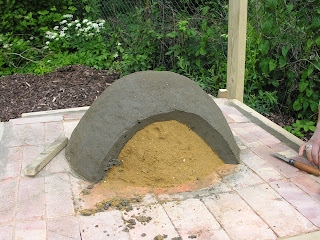 The oven before sand removal 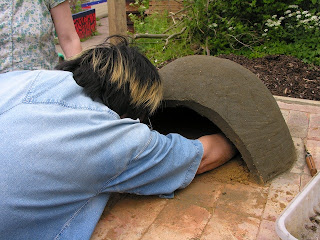 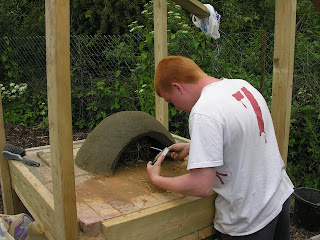 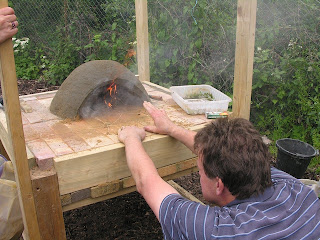 Rupert explains how the shape of the oven helps the fire to get enough air
The oven now needed an entrance and chimney to help it work properly. This was created by adding more sand, this time over some bricks, with a cardboard tube to mould the chimney around. We follwed this by another firing to harden this element. This was the last stage for today, because the oven needs time to harden and dry. Eventually it will be double the thickness. 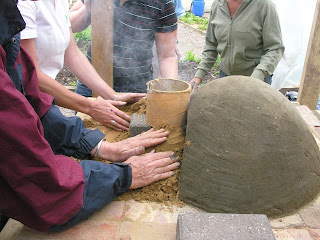 Making the shape of the entrance and chimney 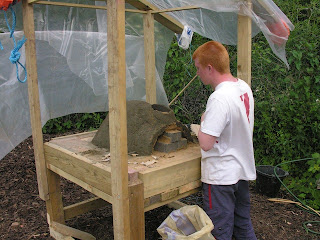 Ellis sets the last fire of the day
Everyone agreed that they really enjoyed themselves, and Catherine decided that she'd like to become a regular volunteer with us, which is great. We'd like to thank Rupert for his excellent leading of the workshop - making sure that we all got a chance to try every part of the job and giving us very clear instructions and explanations for each stage. We're hoping to have the final stage finished in time for a big work day in a few weeks, so we'll let you know how we get on. 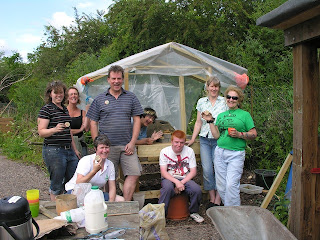 The team with the new oven